Colony Attack is the great game in which you can create your own planet and can explore the great universe of fighting. The game is similar to colonies vs. empire but far better from it you can be the great commander of the colony of yours and you can fight with your opponent to keep survival. It is the massive multiplayer game which gives the allowance to create everything. You can easily grow the colony in this game. You need to build the new powerful planet and then you can attack to different planets and can make victory over there.
In this game you can choose the different pirates in order to fight and just attack the planets and players in order to explore the asteroids. You will view different stars and other wonderful treasure in game. For fighting just build the fighters ship and including battleships, corvettes and then just be ready for having command. Do search of powerful shields and unlock them try to find different armor and new ships in game. You will view the beauty of the stars in planet and will give beautiful experience while you will play the game. You can also join the alliances in game just make them friend and do the war all around the galaxy.
Just try to complete the daily events in game against all the players of the world, this can give you the ultimate rewards and this will help you out in game. You can simply attack the players of planet and these also include empire and pirates. Just play with your friends and get on the top in leader board and just become the warlord of galaxy. You will also get many advance missions in game and fight with the online players to get more awards. 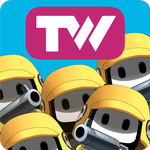